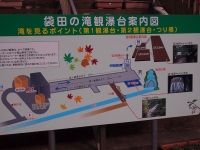 Monday was a public holiday so I planned on heading out somewhere.   Taking advice from a friend who used to live here I headed out to the frozen waterfalls..  Fukuroda no taki 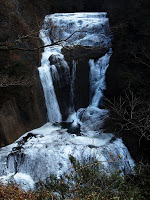 A relatively easy trip and not too much walking/climbing – I have some new boots that I need to wear in, they are great boots, but need some short trips to break them in…  (and me too, as they are pretty heavy!) 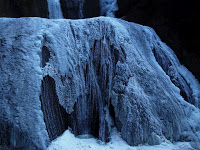 So armed with  Scarf, gloves, coat, hat, camera, lunch box, thermos, gps, phone… I headed of the the next prefecture….The falls were indeed frozen… there are 3 different sets, getting more impressive as you go. 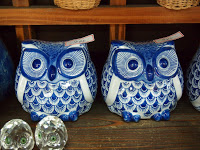 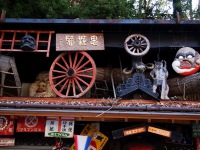 The falls are about 50km from Otawara, lots of pretty villages along the way….

Notes from Wikipedia: Fukuroda Falls (袋田の滝 Fukurodanotaki) are located in Ibaraki Prefecture in the town of Daigo (大子町 Daigomachi), district Fukuroda (袋田). The Taki River (滝川 Takigawa) has its source spring just above the falls. The river flows through the falls and ultimately joins a major Kuji river (久慈川Kujigawa). The width of the falls is 73 m, while the height reaches 120 m. During winter the falls may freeze. The falls are ranked as the third most beautiful waterfall in Japan, coming after Kegon Falls (華厳滝 Kegonnotaki) and Nachi Falls (那智滝 Nachinotaki). To get there by car, go up the Joban Expressway to the Naka Interchange and exit back towards Tsukuba. Turn right at the first main road and then again right on Route 118 a couple of km up from there. Continue up 118 through Omiya for about 35 km. The falls are to the right just shortly before you get to Daigo Machi. The closest train station is Fukuroda JR station located 2 kilometers away.