The Sessho-seki (Japanese: 殺生石), or “Killing Stone,” is a famous Japanese story.
Allegedly the stone kills anything that touches it.

The legend behind the stone is the story of Tamamo no Mae.  Tamamo-no-Mae was a courtesan under the Japanese Emperor Konoe (1142 -1155) She was the most beautiful and intelligent woman at court and many including the Emperor fell in love with her.

The Emperor  mysteriously became ill. After consulting priests and fortune-tellers to no avail, finally an astrologer, Abe no Yasuchika, told the Emperor that Tamamo-no-Mae was the cause of his illness. The astrologer accused  Tamamo-no-Mae  of being a nine-tailed fox (kitsune) working for an evil daimyo, who was plotting to take the throne. 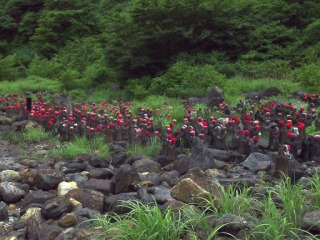 Tamamo-no-Mae disappeared from the court.  The Emperor ordered two warriors Kazusa-no-suke and Miura-no-suke, to kill the fox..  . The warriors found the fox on the Plain of Nasu, and Miura-no-suke shot and killed the the fox with an arrow. The body of the fox became the Sessho-seki, or Killing Stone, which kills anyone that comes in contact with it. Tamamo-no-Mae’s spirit became Hoji and haunted the stone.
Hoji is said to have haunted this stone in Nasu until a Buddhist priest called Genno stopped near the stone and was threatened by Hoji. Genno performed spiritual rituals, and begged the spirit  until finally Hoji relented and swore to never haunt the stone again.

In Matsuo Bashō‘s famous book, The Narrow Road to the Deep North (Oku no Hosomichi), Bashō tells of visiting the stone in Nasu, located in modern-day Tochigi Prefecture

Below the stone, there are hundreds of little stone people in prayer.These statues were placed here by women who lost their babies, although i cant find out what period this occurred and if it is still practiced