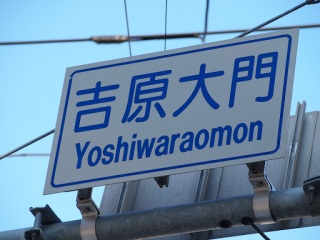 The Yoshiwara was a famous pleasure district,(red-light district) in old Edo, present-day Tōkyō, Japan.  In the early 17th century the Tokugawa shogunate restricted prostitution to designated districts to try to restrict prostitution. The Yoshiwara was created near what is today known as Nihonbashi. 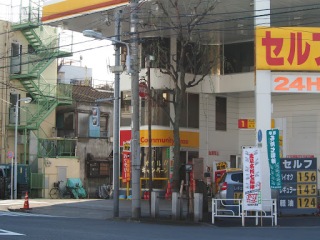 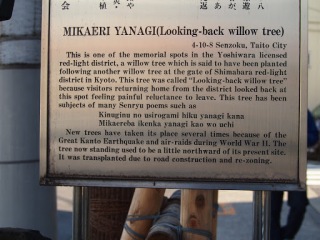 In 1656 the government decided to relocate Yoshiwara to its present location north of Asakusa on the outskirts of the city.

The old Yoshiwara district burned down (along with much of the city) in 1657; it was rebuilt in the new location, when it was renamed Shin Yoshiwara (New Yoshiwara), the old location being called Moto Yoshiwara (Original Yoshiwara); eventually the “Shin” was dropped, and the new district became known simply as the Yoshiwara.

The Yoshiwara was home to some 1,750 women in the 18th century, with records of around 3,000 women at one time.
The area was damaged by an extensive fire in 1913, then nearly wiped out by an earthquake in 1923.

It remained in business, however, until prostitution was outlawed by the Japanese government in 1958 after World War II.
Not much remains of the original Yoshiwara beyond Yoshiwara  shrine, the temple and a peculiar curving street, said to have been designed to hide the quarter from outside. 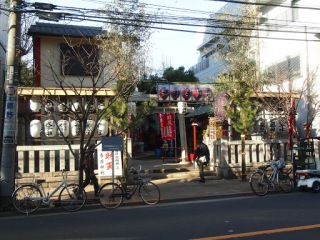 Stories say that there was a willow tree at the entrance where departing guests looked back along the curved street into the Yoshiwara.  It was called the “looking back willow”. Where the tree once stood, sadly there is now a gas station. 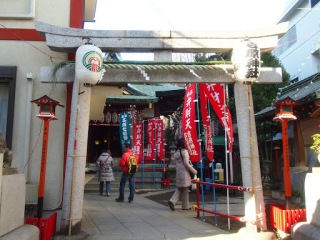 The Yoshiwara Benzaiten monument, erected in 1926 was once the site of a pond.

When the fires raged after the Great Kanto Earthquake in 1923, 490 inhabitants of Yoshiwara, locked inside the quarter, drowned themselves in the water. (I’m not entirely sure that drowned was the cause of death –  since it is incredibly difficult to drown yourself –  but needless to say they went to the pond for safety and perished! –  maybe smoke, heat ??? )


The Yoshiwara shrine is dedicated to Inari the god of business and Benzaiten the goddess of protecting women.  Difficult to see how they come together successfully in a pleasure  district .

Thanks to Wikipedia and CNN travel for background