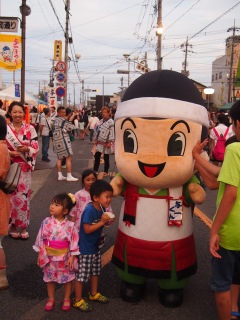 Yoichi Festival or Yoichi Matsuri is held in August in Otawara city, centered downtown in the Kanodoro area.

Yoichi is ‘Nasu no Yoichi’ our local hero and mascot, who famously shot down a fan on a small boat from the back of a horse in the battle of the Heike in the 12th century. 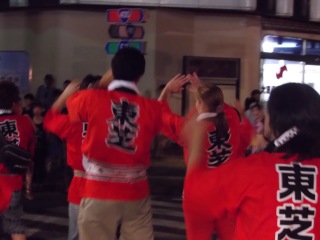 There are street stalls everywhere selling food, drinks,snacks and all sorts of strange things and everyone is dressed in summer yukata and matching outfits for the dancing groups.

Toshiba joined this festival with a big group this year, maybe 200 people from the factory dancing through the streets of Otawara.  To make sure we got it right (:-)) we practised the dance at lunch time during the week in the factory.  In the evening  everyone met downtown and got our happi coats and headbands and joined our colleagues waiting to dance through town.

Some of the dancing groups were very professionally dressed and danced in unison, some not so much, but great fun was had by all…
It was a noisy, fun filled evening.  There’s a video on you tube on my page showing the team in action ! 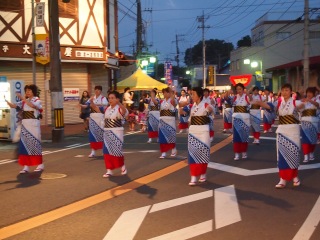 Yoichi Festival 2013
The second day there were teams dancing to more modern music by the Kanodoro in a competition.  The dancing was brilliant and again everyone was dressed up in matching outfits and the spectators in summer yukata, its was colourful and noisy, but everyone was relaxed and having fun.