City is situated in the North West coast of Japan, the capital city of Akita Prefecture.

The coastal scenery on one side and the mountains on the other make it a very beautiful regions, with many hot springs in the region.

The city of Akita is well known for its festivals especially the Kanto Matsuri, a large festival in the beginning of August in which participants balance long bamboo poles with dozens of paper lanterns attached to the end.

Another famous festival in the prefecture is the  Yokote Kamakura Matsuri that is around 400 years old. It is held every year on February 15 and 16 in the city of Yokote and features many igloo-like snow houses, called kamakura, which are built at various locations across the city.

Watch out for the “namahage” Local men wearing straw capes and colourful ogre masks., wandering around town in two’s and threes making sure the locals (especially children at new year) behave, but they were out and about in July.

Akita is also known as a rice-farming region. You can try various local specialities such as the ‘Kiritanpo-nabe’ stew made of rice, and ‘jizake,’ and it is quite famous for its sake.  Also well known in the region is Iberiko gakko –  a pickled, smoked white radish, that is really delicious..

In the city you can walk around the beautiful Senshu Park which was once the grounds of Kubota Castle. Once a castle belonging to the Satake clan of Akita. The park is surrounded by a moat covered in lotus flowers grown from 2000 year-old seeds.

There is a watchtower museum in the Park, called Osumiyagura which was reconstructed as the memento of the 100th anniversary of Akita becoming a city. Historical documents are exhibited inside and there are great views over the city from the observatory level. 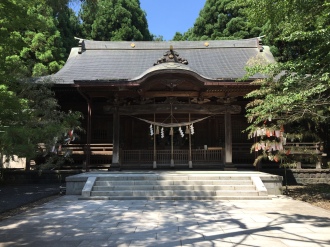 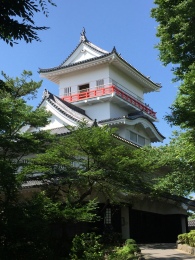