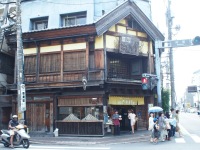 Kawagoe (川越市) is a city located in Saitama Prefecture, Japan.   It is known also as little Edo because it still has some streets and houses preserved from that period.

Kurazukuri Street –  Kurazukuri no machinami is a section of a street lined with traditional warehouses constructed in a style called kurazukuri and maintains the appearance of life during the Edo period. After the great fire of 1893, kurazukuri-style warehouses began to be built  in Kawagoe.  The 4 layered wooden windows shutters were to try to prevent fire spreading.

Close by is candy alley  –  Kashiya Yokochō where stores sell old-fashioned cheap sweets and snacks, most of which are priced at less than 50 yen. The location was known as a neighborhood where many confectionery manufactures lined the alley.

Toki no kane is a bell tower originally built by the order of Sakai Tadakatsu  between 1624 and 1644. The present structure goes back to 1894, a year after the Great Fire of Kawagoe. It is a three-story tower measuring 16 meters in height. The tower has been telling time to the city’s residents for 350 years and has been deemed as a symbol of the city.

Kitain Temple is a Buddhist temple dating back to A.D. 830, this temple grew in prominence in the late 16th century when the shogun visited Kawagoe.


Toshogu Shrine, also on the Kitain temple grounds, was built in 1633 to honor the late Shogun Ieyasu Tokugawa who had aided the development of Kitain. However, a fire in 1638 destroyed most of Kitain as well as the Shrine.
The Shrine was rebuilt in 1640 under orders of the third Tokugawa Shogun Iemitsu, the architecture of which closely resembles that of the main Toshogu Shrine at Nikko. 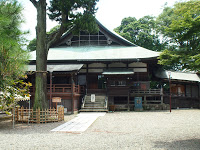 The 1638, fire destroyed most of Kitain. To help rebuilding it, the third Tokugawa shogun, Iemitsu, ordered several palace buildings to be moved from Edo Castle to Kawagoe. These are today the only surviving buildings of Edo Castle because of the damage Tokyo suffered during the Great Kanto Earthquake of 1923 and World War II.  It is also believed to be where the Third Tokugawa Shogun, Iemitsu was born

Kitain has several gardens both inside and outside the museum area. Planted with plum, cherry, and maple trees, plus a variety of flowers, particularly hydrangeas and azaleas.
Gohyaku Rakan statues, 540 stone statues of the disciples of Buddha, each with its own facial expression are in a small area near the temple.   Carved between 1782 and 1825, they portray the disciples in a great variety of positions, all different.  You are supposed to find your statue from your birth year. Put money on it for luck
(Sheep (hitsuji) – People born in the year of the Sheep are elegant, highly accomplished in the arts, passionate about nature. At first glance, they seem to be better off than the people born in other years. They are deeply religious and passionate in whatever they do and believe in. :-))
Thanks to Wikipedia for background